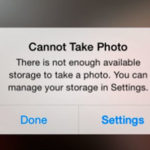 Is there anything more annoying than running out of storage space on your phone? Of course there is, but I’m doing A Thing here, come on.

That seemingly uninhibited ability to draw any digital resources from any source of your choosing—automatic data backup, streaming music, videos, email, scheduling, games and a map of our entire spherical Earth among other things—suddenly about as powerful as Superman during a kryptonite parade all due to an offensively minor issue like “storage space.”

Okayfine, I’ll drop the theatrics…but still, it’s a totally avoidable issue, and the Wall Street Journal recently ran a pretty informative piece with  a few tricks for keeping things clean in there.

You know, the thing about Swiss Army knives is that they can be incredibly useful if you need access to a wide range of tools in a pinch…but very few of the actual tools are really all that good.

Think about it…you’re not going to clear brush with the knife the way you would with a machete.

The new ones with the USB storage are kinda cool, but I don’t really see a scenario where I’d need a 5GB data drive in a survival situation,

If you’re thinking about doing any elaborate scissor work using only the pair equipped to a multitool, I hope you’re at least going to make a YouTube video about it.

I riff thusly to illustrate why I’m not a big fan of those giant honking printer/scanner/fax stations. Besides being the approximate size of New Zealand, they just don’t tend to have all the features you would want in a dedicated version of any of the above.

For example, find me one of those paper fortresses with one-button searchable PDF creation, wireless scanning to devices from PC and Mac to Android and iOS and streamlined scanning to the cloud.

Again, you can, but it’s probably the price of a ride on SpaceX. (Can you tell I’m in a superlative mood today?)

That’s why I’m a big fan of the Fujitsu ScanSnap Document Scanner I got on Amazon. It has all those features along with fast double sided scanning of up to 25 pages per minute through its 50 page feeding system.

It also does not weigh several metric tons like those pachydermic paper processing printing presses.

As Young As You Feel…

Despite how old my kids go out of their way to make me feel sometimes, I’m not quite the traditional retirement age yet. In fact, whatever number just came to mind for you may be a little low according to the resultsof a recent study spotlighted  in a New York Times article.

The researchers involved made some pretty surprising discoveries, including that there is a direct connection between the percentage of people working at age 60 to 64 and their performance on memory tests as they got older.

Apparently on the whole, the longer people in a country lived their lives in a way they considered productive, the better they did on the tests. It’s certainly an interesting idea…even more so if I can get that gig as a professional barbecue contest judge in my later years.

Still, it’s no secret that I’m not as young as I used to be. (Few of us are that lucky.) In the uncertain times of today, it’s easy to slip into the mindset that it’s all downhill from a certain point.

Of course we’re all headed for the same destination so it’s best to just make the ride as enjoyable as possible, and a book I read a while back does an excellent job reminding me of that when I’m sick of hearing it from myself.

“Younger Next Year” is a book written for men of the age where “taking care of oneself” actually becomes more complicated than “don’t die” and “try to eat a vegetable from time to time.”

The text is filled with helpful insights about getting the most out of your decades of adult experience, and “Younger Next Year” also  has a female-focused companion text I haven’t read yet but that I’m willing to wager is equally illuminating.

Well, that’s pretty much everything on the ledger for this week, but before I go I want to say I’ve noticed that the newsletter seems to have a few dedicated fans.

Not just “oh, look, it’s Tuesday morning again and Brad is going to ramble about some bundle of wires or configuration of code, that’s fine.” More like “a single anonymous reader opened this blog 60 times this week.”

Is your dedication that deep? Do you have nothing better to do?

Dare I say it…do we have superfans?

Well, the first thing I’m going to do this summer is find out. Shoot me an email  with a picture showing off your undying devotion to this weekly technology digest and Team Archway will choose the winner of a $100 Amazon gift card because of course that’s the prize.

Looking forward to seeing how great people think I am…thanks for reading!