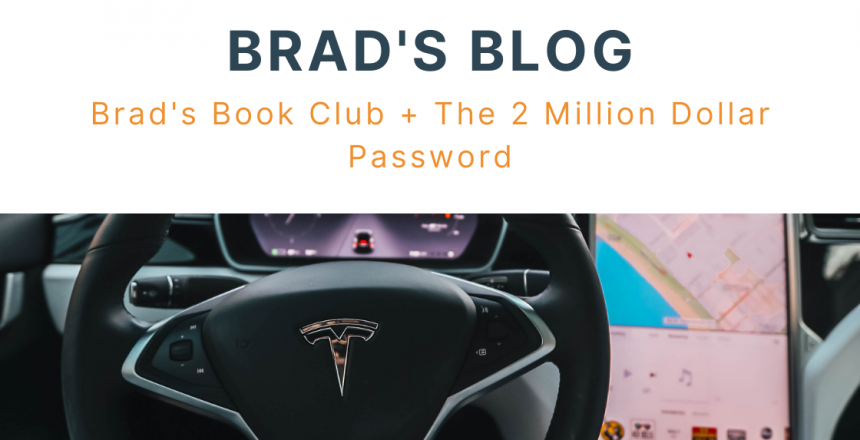 Did I Mention I Have a Tesla?

Recently my family called me out for being ‘that guy’ who always can always find an excuse to bring up his Tesla. Traffic was a pain? Didn’t even notice because my Tesla was on autopilot. Gas prices through the roof? I just charged my Tesla for $6. My most  recent Tesla obsession is the newly announced Tesla Model Plaid, which has a powerful GPU with computing and gaming power of the PlayStation 5. There’s never been a car that has this kind of state-of-the-art computing technology, state-of-the-art infotainment, and a state-of-the-art price tag of $129K. Not sure if my family will contribute to the “Brad wants to play video games in his Tesla” Go Fund Me, but that’s their loss!

From Podcast to Page-Turner

On my recent vacation, internet and cell service was essentially nonexistent, so I had to find some old-fashioned entertainment: reading a book! The Bomber Mafia weaves together the stories of a Dutch genius and his homemade computer, a band of brothers in central Alabama, a British psychopath, and pyromaniacal chemists at Harvard to examine one of the greatest moral challenges in modern American history. The book was written based off author Malcom Gladwell’s podcast, Revisionist History, and is totally an ‘everything-you-thought-you-knew-was-wrong’ page-turner.

Microsoft is back teasing Windows 11 again. In a new video on YouTube, the software giant has published an 11-minute collection of startup sounds from various versions of Windows that are slowed down by 4,000 percent.

Microsoft positions this as a relaxing video for those far too excited by the Windows event on June 24th, although, of course, a complete internal version of it has already leaked online (and as your trusted IT and cybersecurity geek,please, for my sake, do not download it from any sketchy sites). Based off the leak, Windows 11 is full of mostly small visual changes, but we’ll know more for certain when the official launch takes place.

Fear is the Path to the DarkSide

Infamously earlier this year, Colonial Pipeline, the largest pipeline operator in the United States, was compromised. Led by cybercriminal gang DarkSide, the hackers were able to acquire the password to a VPN account that was no longer in use yet remained active. The single-factor authentication method granted the attackers access to Colonial’s IT network and, in turn, its sensitive data.

Some good news? The U.S. Department of Justice said it has recovered $2.3 million worth of Bitcoin that Colonial Pipeline paid to the DarkSide. If you are worried this could happen to you or your business, setup 2-Factor Authentication. It could save you $2.3 Million Dollars.

That’s it for another edition of Brad’s Blog! Thank you again for continuing to support the newsletter, it means more than you know! Now I’m off to enjoy the Southern California Summer weather and go on a run with my Couch to 5K App, because I have, indeed, spent a lot of time on my couch the past year and a half. Have a great rest of your week!

PrevPreviousWhat is Remote IT? Learn How It Can Revolutionize Your Insurance Agency