Wonders of the Universe and IT for Insurance Agents 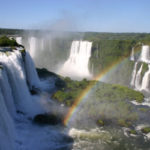 If you’re wondering where I’ve been for the past few weeks, I’d love to tell you about my recent trip to Argentina…heck, even if you haven’t been wondering, I’m always excited to share. South America is known for its dizzying array of picturesque panoramas, and Iguazu Falls in Argentina is near the top of the list for me.

Our team seems to be growing with each passing month, and so our collaboration needs are starting to move beyond personal communication tools such as Skype. Getting everyone on the same page when they may not be on the same continent isn’t always easy, but I’m finding that Slack at least makes it feasible.

Slack can bring all of your correspondence together in one convenient, easy to navigate package, giving each team member the power to contribute in an organized fashion. Slack lets you build a searchable archive of your communications along with providing a suite of project management tools, so it feels like you’re all under one roof, just with less required office space.

Have you ever heard of WiFi hacking? It’s a lot less innocuous than trying to finagle a free Internet connection at a hotel…cybercrooks can access passwords, credit card information, emails, and even those photos you swore you’d keep a secret.

They call it a “reinstallation attack vulnerability” in the biz, but you can just call it “trouble” if the security of your data is a priority…which I’m sure it is if you’re reading this. Arm yourself with knowledge by checking out this TechCrunch article…otherwise, the consequences could be dire.

Fun fact about me: I actually started out my college career with dreams of becoming an astronomer. My teachers always said I was something of a space cadet growing up, and I wanted to fulfill the promise they so clearly saw in me at the time.

Sadly, my limited grasp of advanced theoretical physics outweighed my extensive knowledge of Star Trek, so my dream of becoming the new millenium’s Galileo remains unfulfilled–so far–but the passion for all things cosmic remains, and so I’m really excited about a major discovery made just this week.

You see, after centuries of observation, astronomers have discovered yet another unfathomable wonder hanging tantalizingly in the Universe all around us…they’ve dubbed it a “kilanova,” which sounds a lot less impressive than what it actually is: two collapsing stars fusing together to create a celestial explosion of precious metals and pure energy.

If it sounds too amazing to actually exist, just listen to some of the other mind-blowing aspects of this newly observed deep space phenomenon:

-The material within the construct is so dense that a teaspoon of the substance weighs about one billion tons. One. Billion. Tons.

-The colossal collision also generated a gamma ray burst, an eruption of energy so powerful that it could end life on Earth from clear across the galaxy.

-The actual explosion took place a while back–130 million years, give or take a few millenia–and only now reached out instrumentation after traveling at the speed of light the entire time. Dinosaurs on Earth missed the whole thing.

It is important to note here that none of my typical embellishment is at play…the facts are profoundly astounding on their own merit. I’ll quit nerding out over it here, but only so you have a chance to be awestruck on your own.

All right, that’ll about do it for this go-round…at this point I have to save something for the following episode. Thanks as always for taking time out of your Mon–Tu–um, day to indulge me…my inbox is open if you want to chat. I’ll try to be back on schedule next time, here’s to finishing strong this week!