Greetings from the Republic of California! 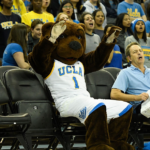 After coming out red-hot to start the season, my Bruins have been on a bit of a slide lately. It’s not the greatest time to be working through a slump with March and its madness quickly approaching, but I’m hoping to see them bounce back this week in their stretch of games up in the Pacific Northwest, including 2 in-conference games.

Of course, it remains to be seen whether those games against teams from Washington State and Oregon might soon be known as international games. That’s right, the so-called “Calexit” is actually picking up steam, with actual secession documents being delivered to the Secretary of State’s office proposing to establish it as a sovereign nation or bust it up into several states.

As a Californian, I can say this isn’t the first I’ve heard of this, but it is the first I can remember the movement being this mainstream…it was always pretty much treated as a joke. Now, here we are. Interesting times we’re living in, but you already knew that.

The World is Calling

While we’re on the topic of departures, I want to congratulate my son on his successful exit. He’s in the process of leaving for school in Italy, and naturally the topic of mobile phone plans came up. He had an unlocked phone so I just switched him over to T-Mobile, who has a really great international setup.

Deals like the Simple Choice and T-Mobile One plan include unlimited texting and 2G data in almost 150 countries, and his plan only costs 20 cents per minute for international calling, which sounds a bit pricey until you look at some of the alternatives. They even have high-speed data packs available in case you just have to post your travel pics on Instagram in real time.

Another good mobile option for frequent globetrotters is Sprint’s Open World plan, which can be added to your existing line at no charge. Unlike most others, the carrier provides a full network of coverage throughout South America and the Caribbean excluding places like Cuba, but then again if you’re headed there your concerns are probably different.

It seems like the cybercriminal community is always coming up with new ways to trick folks into giving up their personal information, and the newest popular method is particularly sneaky.

Reports of attacks involving emails that mimic the appearance and content of other emails in your inbox are becoming more widespread, and some are so sophisticated as to include functional Gmail login pages to steal your information.

This article goes into detail about how to spot authentic Google emails, but the fact that it’s more difficult than ever before is honestly kind of disturbing.

If you’re a fellow owner of an iOS device, you know they can have little issues from time to time. Screen glitches, volume problems, apps gone awry, that sort of thing. Our ancestors used to solve everyday malfunctions like these with their smartphones by popping the battery out for a breath of fresh air, but Uncle Leo has the home remedies for your slightly sick iOS device today.

Well, that about does it for this week. Thanks as always for making time early in your week to share with me, I always appreciate it. Be sure to send plenty of postcards from the United States if this whole thing doesn’t blow over!